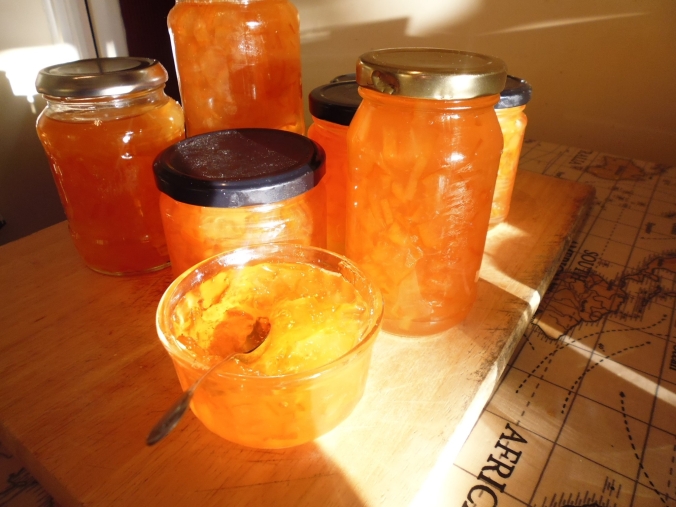 It’s not just Paddington Bear who loves marmalade. I do, too, but it can be a faff making it. By the time you’ve finished you could be halfway to Peru. I was telling an Indian friend about the cutting, squeezing, shredding, soaking, simmering and boiling that goes into every jar of marmalade and she said “That’s an awful lot of work.”

So it is. Even Saint Delia never uses more than two pounds of oranges at a time because it is time consuming. So I decided to spread the job over two days and it was a doddle.

Seville oranges were 79p a pound and I bought two. My basic recipe is two pounds of sugar and two pints of water for every pound of oranges. If you add more water you get a thinner end result, more sugar and it’s sweeter. Brown sugar makes it darker. And it’s your choice if you add a tot of whisky at the end.

On the Sunday I washed, halved and juiced the oranges, reserving the juice and scooping out the pith and seeds into a separate container. A grapefruit spoon helps. Then I cut each half in half, flattened and shred it with a sharp knife. This is the really boring bit. You might start out intending to make very thin shreds but soon lose resolve.

I put the shreds into a preserving pan and added the water and juice. I got 14 fl oz, or 350ml, so deducted that from the amount of water. Leaving it to soak overnight helps to tenderise the peel but not by much. I still had to simmer for an hour the next day, Marmalade Monday.

Meanwhile, you’ve got the pips and peel, which contain the pectin to provide a set, to deal with. Put them in a sterilised jelly bag, tie up with string and dangle it in the pan. Cover with a cloth and forget about it. You shouldn’t need preserving sugar or lemon juice but I like to add that from half a lemon just to be sure.

The next day put the pan on the heat and simmer until the peel is tender. Check by squeezing some with a spoon against the pan. Careful, it’s hot. Once you put in the sugar it won’t soften any more. I like to add my sugar in batches on a moderate heat, making sure all is dissolved before adding more.

But before all this you need to remove the jelly bag with pulp and pips. Put it in a dish, allow to cool, then squeeze out any juices. It’s a bit like milking a cow.

Now there is a lot of myth and magic about achieving a set. I don’t use a sugar thermometer because I find they are inaccurate and gave me several years of prdeserves set rigid when commonsense told me otherwise. You can’t beat the wrinkle test with a blob on an ice cold plate. And if the marmalade is coating the side of the pan or clinging to your wooden spoon, that’s telling you it’s ready.

I did my first test for a set ten minutes after bringing the pan to the boil. Put a blob on a plate and stick it in the fridge and don’t be in a hurry. Give it a good five minutes and have a cup of tea. Meanwhile, turn off the heat under the pan. A lot of recipes don’t tell you that.

It was going the right way but needed five minutes more. I filled two jars and reheated the pan for another five minutes for another, firmer, set. Turn off the heat, give the mixture a good stir to distribute the peel and allow to cool before filling clean and sterilised jam jars. I filled nine of different sizes with some left over in a dish. And though I say it myself it’s lovely.

Follow this recipe and you should be right. Oh and don’t forget that last plate left in the freezer!

WHAT CAN GO WRONG AND PROBABLY WILL?

There’s scum in the pan. Ignore it and put it all in the first jar, skim it off or add a knob of butter. I don’t know why but it works.

My peel has all floated to the top of the jars. You didn’t stir enough and allow to cool properly. It’s still good to eat. Try upending the jars as they cool every ten minutes so eventually the peel disperses.

Help, it’s not setting! Don’t panic. Just leave the jars somewhere quiet and it should set overnight. That’s what mine did yet the leftover marmalade in a dish set almost immediately.