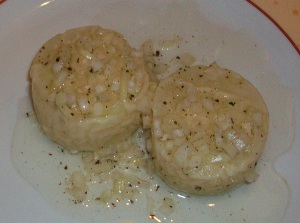 Excuse me while I belch. If you’re in Germany and in Frankfurt in particular, people might not even notice. The banking capital likes to call itself the Manhattan of Europe but it could equally be Chicago, the windy city. It’s all down to what they eat and it’s not the frankfurters.

I came across a local speciality served in beer halls, handkase mit musik (literally, handmade cheese with music) which you might want to avoid if in polite company.

Handkase is a sour cow’s milk cheese, yellowish in colour and fusty-smelling, which is shaped into a round by hand. It comes dressed with oil, vinegar and slices of raw onion and tradition dictates that you stab the cheese with your knife and spear a bit to eat.

I tried some at the Lorsbacher Thal, a traditional eatery with long refectory tables, so it’s all very convivial. The cheese is washed down with apfelwein but don’t think wine, think of the rawest scrumpy you’ve drunk and then some more. It is served out of a salt glazed jar called a bembel and I found it acidic and a little watery.

I was told in all seriousness that wise Frankfurters also order a bottle of lemonade so they can dilute the brew if it is really awful. Apfelwein is the ‘national drink’ of the state of Hesse, of which Frankfurt is part.

Traditional accompaniments to the cheese and scrumpy are hard boiled eggs in a sauce of seven green herbs, although I never did find out what they were.

So where, visitors ask, is the ‘mit musik’ bit? Does an oompah band arrive to serenade your cheese and cider? A Frankfurter will rub his stomach and wink knowingly. All that cheese, vinegar, raw onion, eggs and cider is likely to make your tummy rumble. Or worse. Who said Germans don’t have a sense of humour?

Ladies and gentlemen, flatulence occurs. Perhaps they should change the ‘u’ to ‘a’ in Frankfurt.