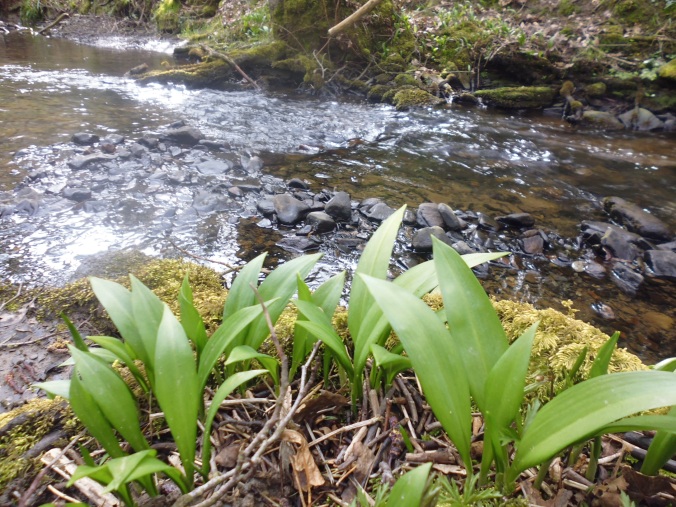 Wild garlic on the banks of the stream

There was a lovely picture of wild garlic pesto on Twitter the other day from one of the local foodie shops which got my foraging fingers twitching. I go on expeditions to find it several times a year.

There is no need to go far, just a mile away in Endcliffe Park, there are swathes of plants by the edge of the Porter Brook which get trampled on during the Easter Duck Race. But I worry about the dogs getting there before me and go further afield, to Shillito Wood, near Millthorpe.

At first I thought it was too early. I could find very little. It’s still very young (and tender), thrusting itself out of the sodden ground – wild garlic loves the damp – and is not yet in flower. It has brilliant white little edible flowers in the shape of a five pointed star. But it’s a bit like blackberry picking: you spend minutes looking for the first until you get your eye in and they’re everywhere.

For a long time I had the woods to myself. The trees are not yet in leaf but the gorse, Thomas Hardy’s furze, was ablaze with yellow flowers. They say you can make a country wine with the flowers but as you need nine pint glasses of blossoms for every gallon I may pass on that.

Wild garlic has so many names: devil’s garlic, bear’s garlic (its Latin name is allium ursinum), gypsy’s onions, wood garlic, buckrams, Stinking Jenny and ramsons are a few. I like the last two best. Country people welcomed it as winter waned but farmers cursed it if their dairy cows found a patch. It tainted their milk, as Hardy recounts in Tess of the d’Urbervilles. It loves the damp and was growing on the banks of tumbling stream which flows into the Barlow Brook.

Wild garlic often grows with bluebells, like the Stinking Jenny still to flower. You cannot confuse the two as garlic leaves are long shiny ovals, bluebells’ spikier. But beware, you might with poisonous lily of the valley. If it has a red stem leave it, wild garlic’s stem is green.

I was planning a soup. Wild garlic makes a gentle pesto (replacing the basil and garlic), very young leaves contribute to a salad and it’s a natural in omelettes. Russians, apparently, preserve the stalks in salt.

The plant was not prolific on my visit and only half grown but that saved separating them from tough stalks later. Collecting them involved a lot of scrambling down banks and there always seemed to be more on the other side of the stream.

I was stopped short by a daffodil seemingly growing right at the water’s edge then realised it was the only one blooming in the wood, a single stem thrust into the stream. But why? Someone had to make a special trip to do this and I wondered at the story behind it: a tribute to a lost loved one or, magically, an offer to the water spirits?

I collected about 10oz of wild garlic and I advise you to wash it several times and pick it over carefully. My recipe called for ‘four big handfuls’ or 200g, so I had that, to a litre of stock, a couple of potatoes and an onion. I replaced the onion with leeks so I had a sort of vichyssoise.

I finely cut the leeks and potato and cooked the gently in oil and butter under a tinfoil ‘blanket’ for about 20 minutes. I added a bay leaf and thyme because I like to fiddle with things. I added the stock (cubes, I’m afraid, as I had none handy) and when the vegetables were soft threw in the greens. Don’t overcook, not more than two minutes, then blitz and season again.

I’ll be honest. The soup wasn’t a terrific success but then it wasn’t a spectacular failure. This blog isn’t going to pretend things always go to plan. Either the recipe needed more wild garlic or less stock, or the plants were a little immature to provide an intenser flavour. But there was an elusive garlickyness

And I’m still wondering about that single daffodil at the water’s edge.