Kate Moss is into making jam

Excuse me, I have to sit down for a minute. You see I’m still reeling from the emotional impact of making my own jam. Yes you read that right. Jam. Gooseberry and elderflower jam, if you really want to know.

Before you say “Swipe me, that Dawes bloke is finally off his rocker,” let me tell you I am ever so slightly extracting the wee-wee. I nearly choked on my home made marmalade the other week when I read in the Daily Telegraph that jam making has become popular with London’s smart set, even if they buy their raspberries from Sainsbury’s, rather than pick them from a bush in the back garden.

Until then I hadn’t realised how much I’d got in common with glamorous multi-millionaire model Kate Moss who, if this article is to be believed, makes her own jam to be sold at the Glastonbury Festival. Really?

Or that jam is being made as you read this by a couple called Sky and Kai in a railway arch in Bermondsey. You might call these people the Jam Set although one thing they don’t insist on is that jams should actually set. “Jam making is something that people should be relaxed about. The WI culture is so prescriptive,” said Sky. Or was it Kai?

The writer of the piece went right home and made her own raspberry jam – in eight minutes. She was, she says, “stunned by the emotional impact.” Don’t ask if it was set. Marguerite Patten (who died earlier this month aged 99), author of my jam-stained kitchen bible, Jams, Preserves and Chutneys, would be spinning in her grave.

What Marguerite says is good enough for me and I don’t think it takes eight minutes to make raspberry jam, not if you dredge the fruit in the sugar. The juices dissolve the sugar overnight.

Her recipe for gooseberry and elderflower jam was spot on: one pound of very crisp gooseberries, picked from bushes on public parkland, boiled until soft in half a pint of water, then slowly add 20oz of sugar and dissolve. Instead of elderflower heads I used a slug of my elderflower cordial. Then fast boil but not for long.

Amazingly it set at the first testing, a very light, gentle set but a set nevertheless. I can’t say I was stunned by any emotional impact but I was chuffed. Last time I made gooseberry jam it was rock hard. But that’s because I used my jam thermometer which is the world’s biggest liar and now rely on the wrinkle test on a plate cooled in the freezer. And I’ve realised you have to turn the heat off while waiting for the jam to wrinkle.

You always know when I’ve made jam because forgotten plates keep turning up in the freezer. Gosh, I’ve just remembered. I’ve done that again . . . 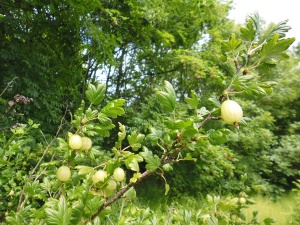