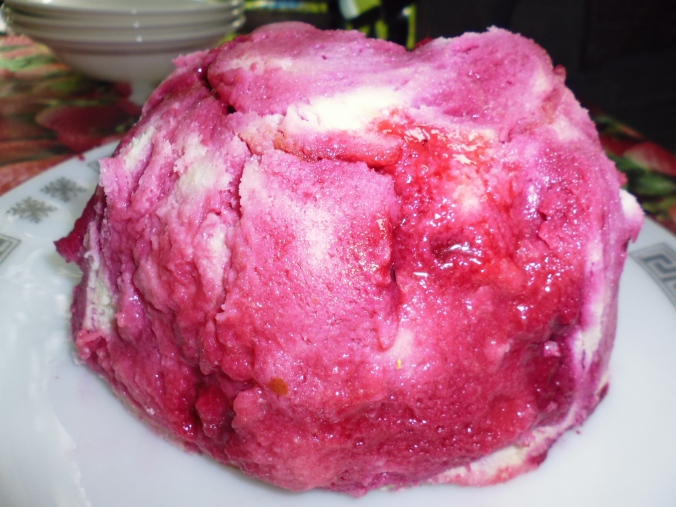 Summer Pudding – I didn’t overlap the slices of bread!

Now I could have cheated. You could have viewed above a picture of the most perfect summer pudding, a swelling red dome full of berry fruit, juice trickling out enticingly at the bottom. Instead, it looks like a mop that’s been dabbing up spilled beetroot juice.

But kitchen life isn’t all perfectly risen soufflés and cherries cleanly stoned the first time, is it? This blog gives it to you, spills, burns and all.

Believe me, it tasted better than it looks. It’s not much but it’s mine and one big plus in its favour is that it has HELD TOGTHER and not collapsed in a jumble of soggy bread and fruit when upended from its bowl.

This is my ‘piece de saison,’ the summer pudding I make every year to celebrate the cornucopia of berries bursting with ripeness on the trees and bushes. Get me! Note I didn’t say supermarket. Part of me is worried about food miles and an equally important part doesn’t want to pay. This year I’ve kgone out and foraged so it was full of blackcurrants and cherries, backed up by bought strawberries and raspberries (my bushes have been raided by the grandchildren).

Summer pudding is a Great British Tradition and every time a foodie writes about it there is usually some learned reference to its beginnings as a ‘hydropathic pudding’ served up to patrons taking the waters in Eighteen and Nineteenth Century spas. That turns out to be a load of b$ll$cks.

According to the Hospitality Info Centre (www.hospitalityinfocentre.co.uk) there is no mention of it before 1902, in a little book called Sweets No 6 by S. Beaty-Pownall of the Queen Newspaper. And the fruit was stewed rather than just simmered before being poured into the bread-lined bowl. Things have been freshened up.

According to John Ayton in The Diner’s Dictionary the name Summer Pudding did not appear until the 1930s. It certainly wasn’t included in Massey’s Comprehensive Pudding Book of 1874 which lists over 1,000 recipes.

Some people get pedantic about what fruit you put in. Some say only redcurrants and raspberries while Delia goes for raspberries, redcurrants and blackcurrants in the ration of 4:2:1. Nigel Slater more or less agrees. Some cooks insist strawberries are a no-no but I can’t see why.

Personally I prefer those recipes which begin ‘Take what you have . . . ‘ and I had an awful lot of cherries and blackcurrants so they went in.

If people agonise over the fruit (don’t) they also worry about the bread. Forget sourdough (too dense for the juices to seep through). Get a decent white sliced, not one that will go slimy. Having said that I paid 75p for a sliced white loaf on the Moor Market and it did the trick nicely although the slices were the thickness of paving stones and I had to horizontally cut each into two.

By the way, some people replace the bread with fingers of sponge but I don’t think that is in the spirit of the recipe.

I use a Pyrex bowl and a good tip is to butter bowl rather than the bread itself so it sticks on well. And OVERLAP the slices. I forget which is why it looks as it does. Gently cook your fruit depending on what they are so cherries and blackcurrants got about four minutes in the pan with the raspberries and strawberries finished in residual heat. I used a spoonful or two of elderflower cordial as liquid (that cordial is proving very useful).

Always have more fruit that will go in the pudding because you can sieve the remained for sauce to pour over. On reflection I could have made the fruit a little sweeter but I was happy. In the autumn I make an Autumn Pudding with blackberries, plums and apples.

After so much pud I’ll have to go to a health spa to sort myself out.

STOP PRESS: Here’s the summer pudding I made the following year, 2016. 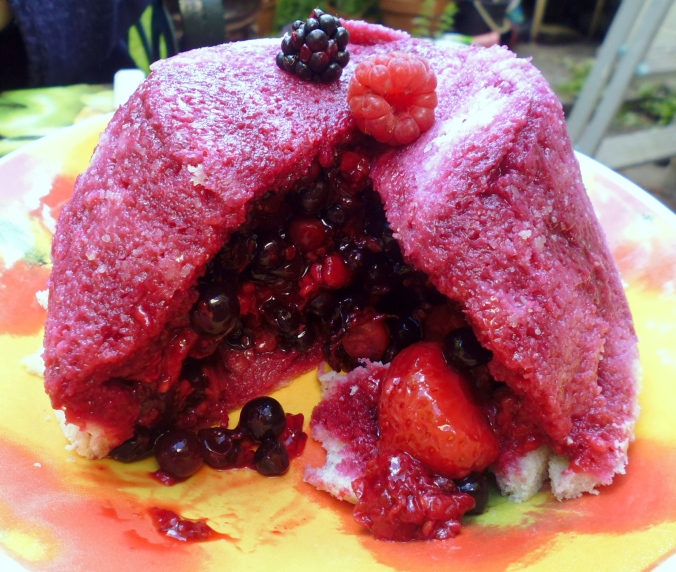 It looked good and tasted good!

One thought on “Don’t laugh, it’s a Summer Pudding”