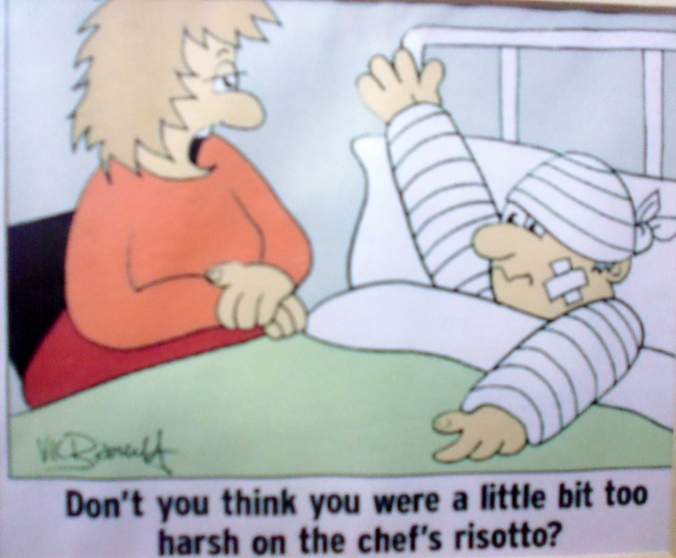 Perils of a restaurant critic: How cartoonist Vic Brough saw it for the Sheffield Star

A bright young student at Sheffield Hallam University, where I give a couple of lectures a year on food journalism, asked me about my restaurant pet peeves. I didn’t stop talking for ten minutes, listing them all!

It’s not that I dislike eating out. I love it. Yet I so often get exasperated when things are not done properly, if at all. For don’t think restaurants are all about food: it’s service, service, service . . . and then the food, which is only part of your night out.

Of course, you often don’t really notice the service until it’s not there, a fact brought home to me in my early reviewing days by the Mystery Diner of the old Berni Inn steak chain. He’d seen my infant column and reckoned I needed a few tips.

We arranged to meet at the Berni Inn at Meadowhead. I was on time, he was late: deliberately so. “While you’ve been waiting ten things should have happened,” he said. I shook my head. “No, I’ve just waited.”

And then he listed the ’service points’ which Berni insisted on. Was I greeted, eye contact made (with a smile), shown a seat, offered the menu, asked if I wanted to order a drink (that was five!) and so on? I think there were several dozen more. I got the impression Berni was as interested in its service manual being followed as the quality of the steaks.

But it was right. Take the first, the greeting. We’ve all walked into restaurants and waited to be acknowledged and shown to a table. So often there is just an overworked little waitress trying not to make eye contact. Diners eye you out of curiosity as you wait. You feel uncomfortable but that disappears the moment you are acknowledged.

My wife and I once walked into a leading Derbyshire hotel, past reception, to the restaurant where we had booked without once being greeted by any of the five members of staff who passed us. That was where we met the overworked little waitress . . .

By contrast, another time I walked into a place in Crookes which was rammed with people but the manager at the back of the room heard the door open, caught my eye and called ‘With you in a minute, sir,’ and I felt acknowledged and happy to wait.

Subsequently, I mentally ticked off all these points when I reviewed a restaurant. It’s all commonsense really, hardly rocket science, but is so often ignored or forgotten. And it’s a question of balance. I really don’t want to be asked to order a drink before my bottom has touched the seat or if I’m enjoying the food before I’ve had a mouthful. But the former happens far too many times and you just know the boss has told them to increase the wet sales.

It was worst, though, in an Indian restaurant where up to five different waiters repeatedly asked if we wanted another drink. They were coming in like a squadron of Messerschmitt 109s.

Another thing I hate is being given the menu, make my choice and then told the dish is off. Or inquiring about the soup of the day and waiting while they ask the chef. Part of the waiting staff’s job is to know what’s on offer. I always had some menu query up my sleeve to see if the kitchen had talked staff through the dishes. It’s also a good idea to let them taste it.

At one restaurant the chef had rung tell me about his latest dish, chicken cooked three ways: the breast poached, the leg roasted and the rest made into a sausage (or something like that). I turned up to dine a few weeks later and asked our waitress in what ways the dish was cooked. She didn’t know but inspiration struck: “He’ll cook it any way you want!”

They say we make out judgements about other people within seconds of meeting them and so it is with restaurants. The first minute or so is crucial. If something rubs you the wrong way the night can be off to a rocky start (or at least it is with me!). But it’s also insurance. If things in the kitchen have gone a little haywire good service prompts us to make allowances. If the kitchen is on song it’s a double whammy in the restaurant’s favour.

All of these points are simply commonsense but it can be in as much short supply in the hospitality business as anywhere else.

One final thing: it may be a generational thing but music in restaurants is very often too loud or the wrong sort. At one time my wife and I used to play a game guessing when Nora Jones would come over the speakers, and how often. One Barnsley restaurant played orchestral versions of TV theme tunes all night, another the complete songbook of Abba. Very often it’s the wrong music for the place as youngish staff play the kind of stuff they like and bugger the customers. Actually, the worst for this is not a restaurant but Majestic Wine. Just a tip: research has shown people tend to order more expensive dishes to the sound of classical music.

Or, as one pub owner once told me, the best music is the stuff that’s played but the buzz in the room is so animated you can’t actually hear it unless you listen out.