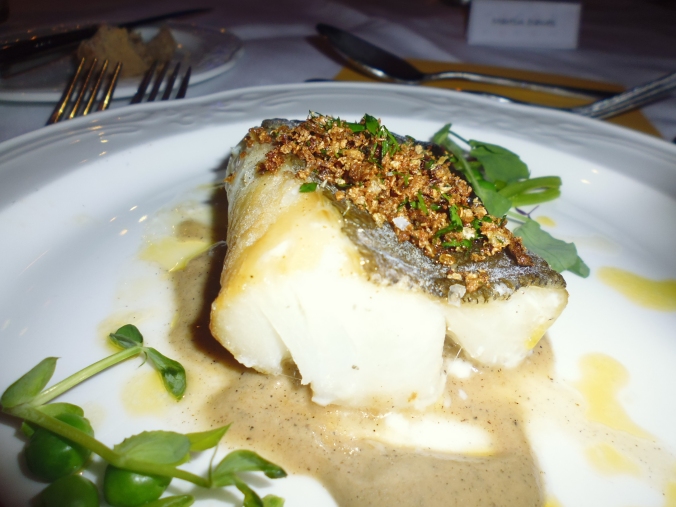 I’m a miserable bugger so when I heard that chef Steven Sumpner’s pop up restaurant, Jack in the Box, was going to be on the same date as Children in Need, that hyped-up frenzy of TV charidee money-raising, I thought: “Good, that’ll get me out of the house and away from it all.” Even if it was on Friday the 13th.

Then I realised it was all in aid of Children in Need.

I first ran into Steven, sous chef at the plush George Hotel in Hathersage, earlier this year for one of owner Eric Marsh’s bashes. Among the nibbles was a pretty nifty mini version of the Sheffield of the Sheffield Fishcake, which, by chance, I was then researching.

The event was in a somewhat chilly hall at Sheffield’s Birkdale School but we had warmed up first with glasses of Buck’s Fizz and canapés which included little balls of juicy homemade potted meat, something of an obsession with Steven. If you read his blog you’ll find out why and discover it is made from beef brisket cooked very low and slow for 24 hours.

In fact, that was one of the highlights of the evening for me although I enjoyed all the food that followed. We started with smoked cod loin spiked with cumin and served with a burnt cauliflower puree, had an old-fashioned country house-style of mulled apple granita, full of Christmassy flavours, then proceeded onto beer braised belly pork enlivened with a crunchy hazelnut dukkah (last encountered in a Bedouin tent in the Jordanian desert).

Steven was letting his culinary hair down. At events like this, chefs can cook what they want, not what the management allows. There was a very tempting, grainy textured spiced cranberry and chocolate tart with pickled walnuts (yes it worked), followed by coffee and petit fours.

In fact, the only thing I felt which didn’t work was the barbecued carrot, another of his obsessions. I’d stick that right up the wrong end of Pudsey Bear.

Towards the end of the evening we all had to put into an envelope what we thought the meal was worth and Steven raised a splendid total of £2,067. 22. (You do wonder about that 22p).

Of course, Steven was helped by all those who had given ingredients for free and by his colleagues from the hotel who provided the excellent service all in their own time. He also got publicity from my friend Lesley Draper of the Sheffield Telegraph whose preview (with recipe) of the event you can read here http://www.sheffieldtelegraph.co.uk/news/chef-s-dish-lesley-draper-talks-to-jack-in-the-box-s-steve-sumpner-1-7567811

I was also delighted to meet for the first time fellow food blogger Ros Arksey, aka Nibbly Pig, who has been entertaining us on the food front for the last five years. You can read her blog http://www.nibblypig.co.uk here

All in all, quite a successful evening.