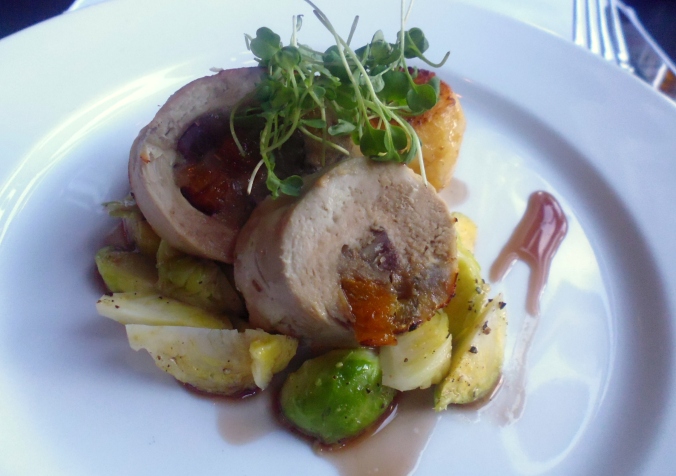 “Didn’t we once judge cheeses together at Bakewell Show?” said Debbie Shaw, eyeing me up thoughtfully at Trippet’s Lounge Bar on Trippet Lane, Sheffield. She was right. What a memory. And what an opening gambit for a conversation.

To be fair they weren’t the first words we had spoken. There were the usual pleasantries when entering a restaurant and Debbie does them well. When a single male diner calls in for lunch he is either (a) Billy No Mates (b) his wife has gone off to the Chatsworth Christmas Fair or (c) a foodie with a review to do, so perhaps I was a bit conspicuous on a quiet Wednesday.

I plead guilty to (b) and (c) and hope to pick up a few new mates by thoroughly recommending Carl and Debbie Shaw’s new venture as an upscale independent eating and drinking place in a city centre not exactly overrun with them.

Beetroot terrine with whipped goats cheese or fillet of pork in Parma ham with Parmentier potatoes might sound like fancy food on a culinary scene awash with burgers and burritos, pasta and pizza, but it doesn’t come at fancy prices. The food, a sort of Modern British tapas, is offered in ‘small plates for between £4 and £8.

Trippets, the name has been revived as it was previously Dada, is in premises with a long association with food, drink and music. I can remember it in the 80s as wine cellar Vat 69, when each November I would call early one morning to review ice-cold bottles of just arrived Beaujolais Nouveau for The Star.

Trippet’s, with its mix of wine, gins (over 40), fizz, food and jazz (the music is every weekend) confuses some people. “They ask, Are you a restaurant or are you a bar? and I say yes,” said Debbie. Apart from the cheese tent, we had also met at the couple’s previous business, the Bull’s Head in Ashford-in-the-Water. I reviewed it for my paper shortly after it was included in Egon Ronay’s top ten gastropubs for 2006 (in such company as The Star at Harome and the Yorke Arms, Ramsgill).

That award didn’t do them any harm but, perhaps, said Debbie, they should have reinvented themselves a time or two before the recession bit. Well, they have now. “This is me,” said Carl, sitting at the bar after service.

They had looked at taking over Smith & Baker’s premises on Ecclesall Road before owners Thornbridge changed plans, revamping it as Rhubarb and Mustard and offered them Dada. The décor has been brightened up: there’s lots of black and white and people say it looks bigger. I’d seen colleague Lesley Draper’s review after they arrived in the spring and made a mental note to take a look.

The cooking is quiet, understated and confident with precise flavours. After good bread served with rapeseed oil from Ashford’s Brock & Morten I had a glorious duck liver parfait, silky, meltingly soft and buttery, served with toasted brioche and a grape and pear chutney so good I wiped its dish clean with my bread (£6.50).

Sticking to fowl, I had three roundels of guinea fowl breast stuffed with chestnut and apricot. I’ve often found the meat, closer grained than chicken, can be a little dry but not here. It was moist. What actually made me chose this was the fondant potato advertised with it (one of those key ingredients which draw me to a dish) and I was not disappointed. It was served with sprouts far crisper than I’d dare to cook at home. I would have loved a little more of the sauce dabbed on the plate (£7.50).

Debbie’s family had run the Bull’s Head since 1953, down three generations. There it was a family affair and that continues at Trippets. Daughter Hollie is front of house and there is son James while the last member of the team is chef Alex Dobson, previously head chef on the Northern Belle luxury train.

Hollie recommended the pudding, a lovely, springily textured sticky toffee which avoided cloying (£5.75). My bill, with a £5 glass of chenin blanc (Debbie will let you sip samples before you buy) and coffee (£2.20) came to £26.95. You couldn’t hope to get out of All Bar One for less.

Former customers from Ashford have found them in Sheffield, where they are making new converts. TripAdvisor reviews have been extremely favourable. The cooking and the atmosphere puts me in mind of the Old Post Office at Chesterfield in its heyday. It has the same number of restaurant seats, 22, although there are a couple of extra tables nearer the bar.

And if you really are Billy No Mates, you can always eat at the bar.

PROS: Exemplary service
CONS: That day’s menu should be in the window not a sample. I’d selected before entering and had to do it again