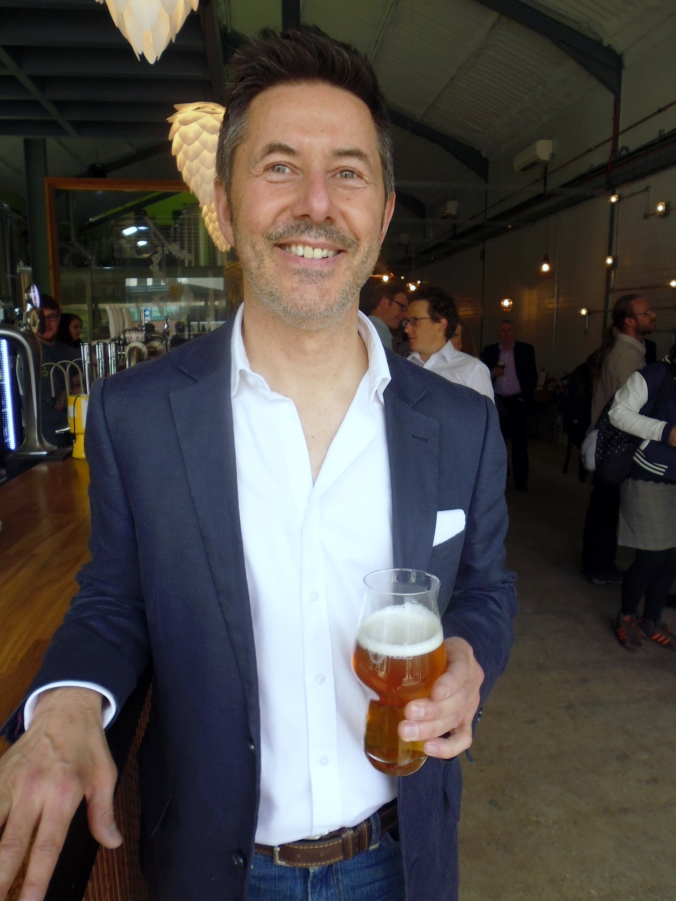 Alex Barlow looks like a decent bloke to share a pint or two with at the bar. Particularly as the drinks are on him. He’s the sort of bloke who knows his ale and runs a beer search website to help you find a decent brew.

But there’s an even better reason to down a pint with him. He runs his own brewery.

We’re at the bar of it right now, the spanking new Sentinel Brewery on Shoreham Street, Sheffield, in premises which used to be a carpet showroom and before that a Majestic wine shop. And I’m taking a sip of his Sheffield Bitter, nicely crisp and hoppy for a warm afternoon. Alex has invited the Press and bloggers to have a few thirds on him to launch the enterprise.

Why Sentinel? I ask and he says: “We want to be a beacon for drinks people trust. A sentinel is a guardian or protector. There are a few dodgy pints out there. We’ll be protecting the unsuspecting drinker.”

A lot of blokes say big things over a drink or two and I notice Alex is nursing three thirds of his first brew, Summer Gold, with all the tenderness of someone holding his first-born. But that’s not the beer talking. He really does know his stuff.

Well you would do if you were a Master Brewer at 26, the country’s youngest, brewed for Bass in Runcorn, Sheffield and Burton, became the first Briton to run the Starapramen brewery in Prague, has overseen a new brewery in Turkey, written a best-selling and award-winning book on beer, lectured on micro brewing at the University of Sheffield and set up All Beer, a sort of search engine for the globe’s best bottles. You don’t get that to do all that by brewing dodgy pints. But you do so by knowing how to avoid them.

So Alex is a big-hitter in the beer world and so is his new brewery, the 23rd in the city although it has to be said some are not more than one man with a bucket and a length of hosepipe. It has cost “touching £750,000” to build. The plant has capacity to brew 6,000 hectolitres (132,000 gallons) a year and space to increase the number of fermenters, presently six. So is Sheffield ready for it? Is this a smart move by Alex?

He takes a sip and invites me to look along the bar. “Customers can see the whole journey in the life of their beer, from the sacks of grain to the fermenting tanks in a single glance. It’s all within the space of 25 yards, the shortest beer miles anywhere I know.” 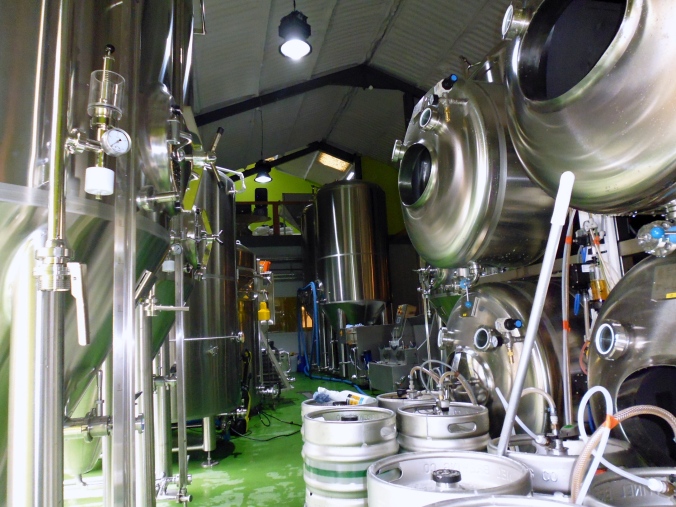 The brewhouse at Sentinel, visible from the bar

As you can tell, he has a way with quotes. That Summer Gold, which I try later, has come straight from the tanks. It has a slightly lemony (or is that orangey taste?), I’m not sure, and is ever so slightly cloudy although I’m not one to worry whether my beer is crystal clear.

He’s switched from industrial to craft brewing but isn’t a Ye Olde Englishe Ale man. He says he has been inspired by what he encountered in the States and elsewhere. Sentinel has a ‘core’ of beers such as Sheffield Bitter, Sheffield Best and, of course IPA, but also Czech Pivo and American Red. Then there will be seasonal ales such as Summer Gold. “I want to brew beer I like and hopefully people like to drink.”

Much of the beer will be sold and drunk on site or in ‘growler’ bottles to take away while a handful of local restaurants and stores are already stocking bottles. Sentinel is next door to student accommodation and not too far from the city centre for a stroll with a pint in mind. The place is equipped with a couple of ‘boardrooms’ for companies to hire for presentations plus there’s the restaurant – think more industrial chic than glitzy venue – for Barlow is a big believer in marrying beer to food.

Beer writer Pete Brown, who compiled a recent report for the University of Sheffield which found the city has nearly five times as many breweries per head than Greater London and that at any one time some 385 different beers are available, was there to raise a glass to the new venture. 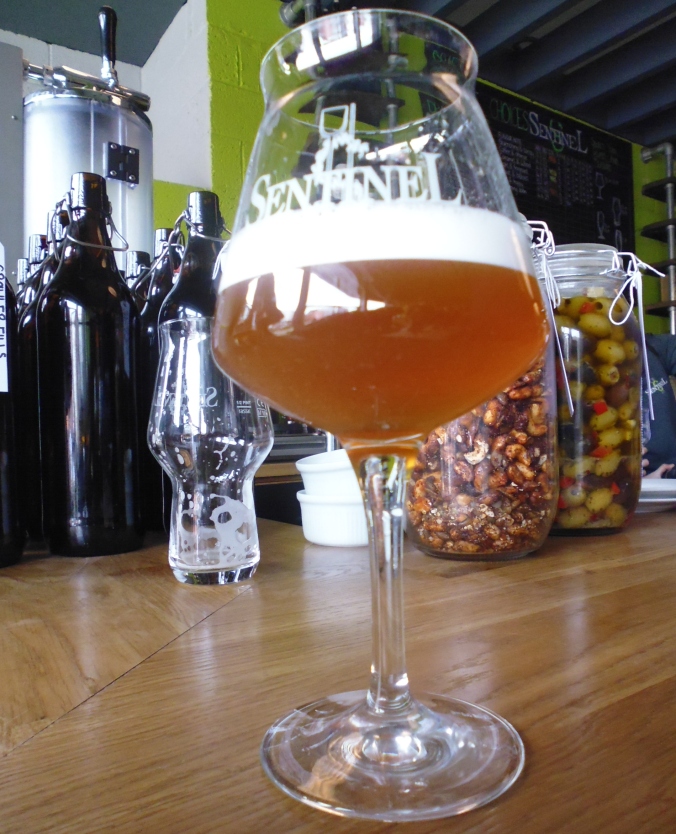 Summer Gold, the first brew, straight from the tank

He said that while the concept of Sentinel, with brewery, bar and restaurant was common in the States it was pretty unusual in Britain – “Certainly such a brilliant space so accessible to the town and not out on some trading estate.”

Brown’s report in April emphasised the need to capitalise on Sheffield’s growing fame as the Beer Capital of Britain (claiming the world is a bit strong) and to encourage beer tourism and the like. After all, in any one year the city has around 1,000 local ales to drink. Three-quarters of it is drunk locally. It is unclear how much is going to happen because these things need organisation and the city council can’t even organise a farmers’ market.

Dave Pickersgill of Sheffield CAMRA has yet to be convinced. He writes in the current issue of Beer Matters that on a recent trip to Flanders he found its Minister of Culture “expressed more interest in the Sheffield beer scene than seems to emanate from Sheffield Town Hall.”

If anyone can kick-start this it could very well be Alex Barlow, seen by some as the spiritual inheritor of the late Dave Wickett, founder of the Fat Cat real ale pub and Kelham Island Brewery in the Eighties. Could that be another smart move by Alex? 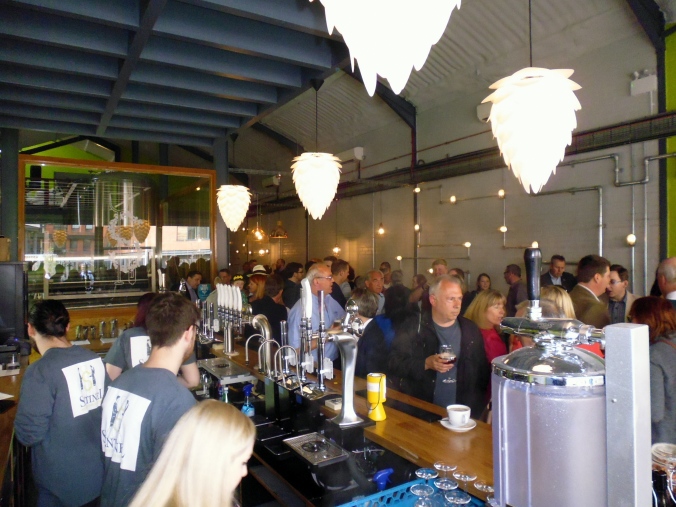 Getting the thirds in on Press day