The man at the next table has ordered chips with his agnello al rosmarino, lamb cutlets with rosemary. The waitress isn’t having it, despite patatine fritta being on the menu. “It makes me angry people ordering chips with Italian food,” she says.

My ears quiver. He banters that he’ll pop out and get them from the Two Steps chippie across the way then concedes gracefully. He’s already asked her, fuelled by pre-dinner lagers, if she would be his dancing partner.

He spends the evening chipless and I muse whether the request has been an insult to her national gastronomic pride. Fiery people these Italians. But she’s Greek, from Corfu. He should beware of Greeks bearing chips.

We are in Akentannos in Sharrowvale Road, Sheffield, a new Sardinian restaurant opened earlier this year in what had been the Pasta Bar. Italian restaurants are ten a penny but they all seem to have the same pan-Italiano menu whereas Italian cooking is highly regional. This is a welcome venture from owner-chef Mario Masia.

We last encountered him at a previous venture, Maso, in Surrey Street, in Tuckwood’s cavernous old restaurant. A brave try. “It was the same cooking but the wrong time,” he tells me later.

The menu has dishes you will know, some with a twist from a particular Sardinian ingredient and some completely new. So my tastebuds are go.

The friend of the chipless man at the next table orders the wine. It’s Sicilian? The waitress explains that as he is in a Sardinian restaurant it is Sardinian. He wonders where Sardinia is.

We have ordered the pane carasau (£3.50), thin, crispy Sardinian bread which is similar to the carta musica we had at Mario’s Maso. I can’t actually remember much about it but hope it will be like the ciccio at VeroGusto in town, flecked with lustrous reduced balsamic. It isn’t. Made with hardly any salt it tastes bland, even though we order it with lovely unpitted olives (£3.60). We ask for plates, oil and salt which improves things slightly and gives us somewhere to put the pits.

Mario explains later that the olives are meant to supply the salt and the rosemary a piquancy but that is a subtlety too far for my Anglo palate and it hasn’t been lagered up.

My wife has a special, Capesante (£8.95), pan-fried scallops with a ‘cream’ of broccoli and pecorino cheese. This was quietly very good indeed, three pieces of scallop served on the inevitable slate, topped by the cream which had the same velvety texture as crabmeat.

A slate of scallops with a ‘crabby’cream

At the next table the woman in charge of the chipless man and the man who doesn’t know where Sardinia is orders more white wine. The waitress gently tells her there’s still a half full bottle in the cooler. She orders water. 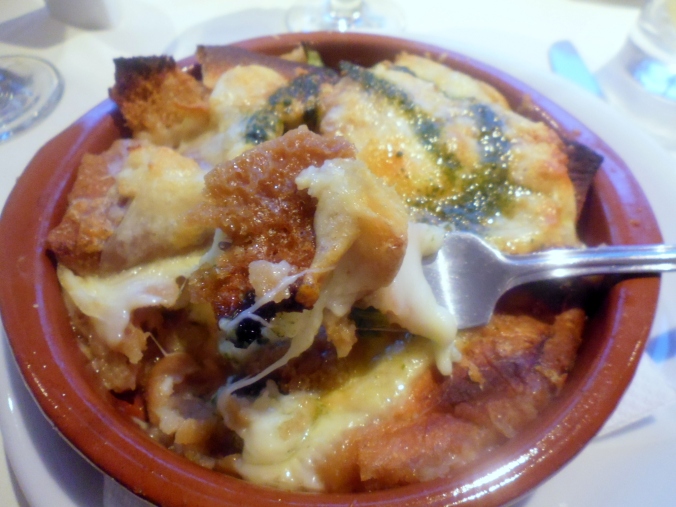 Zuppa Gallurese – not a good choice!

I’d ordered the Zuppa Gallurese (£12.60), a Sardinian speciality which is, the menu explains, “a cross between a lasagna and a casserole; layers of rustic bread sliced, parmesan cheese, meat broth, wild fennel, parsley and Sardinian cheese slices.” Well, that’s the theory. It arrived on my table as an almost solid mass of soggy bread and cheese, the broth having been entirely absorbed. It was a modge. Think Welsh rarebit gone wrong. Think cheesey bread pud. It might be just the thing to power you up a Sardinian mountain to bring down lost sheep but not in Sheffield on a sultry summer’s night. I left most of it, to the consternation of the waitress.

My wife was far happier with her Spaghetti al Cartoccio (£13.95 ), a pasta and seafood version of en papillote, the spaghetti cooked with fish and mussels with tomato, basil and chilli inside a foil parcel. The joy of this dish is in the diner unwrapping it at the table and savouring the aromas wafting out in a superior kind of ‘Ah, Bisto!’ moment. Restaurants don’t always twig this and nor does Akentannos. The parcel was opened in the kitchen and some if not all of the smells had already evaporated.

We finished with an underwhelming tiramisu (£5.90) and Seadas (£6.90) , a sort of deep-fried ravioi filled with cheese. Our waitress was reluctant for me to have it but I wasn’t asking for chips. “It’s bread,” she said. I rather hoped it was pasta or pastry. Well it was full of cheese and I hadn’t liked my cheesy main. It was not the cheese I’d objected to, I said,  but I didn’t know the Italian (or Greek) for modge.

Most regions of Italy have something similar. This, in a sauce of honey and brown sugar, was pleasant.

The next table depart, unsteadily, and I call for the bill which with water and a bottle of house white (£16.20) comes to £82.55, about the cost of a flight to Sardinia. Some prices here are a little ambitious but we did like most of the meal.

We tell Mario we’ll be back soon with relatives as our night was a ‘recce.’ Too bad, the date we give is the first day of his holidays . . .

Akentannos is in the former Pasta Bar