My crispy dosa at the Masala Dosa Cafe

I’m doing it all wrong. When you’re faced with a masala dosa, that crispy South Indian pancake which looks like a roll of linoleum, the one thing you don’t do is pick it up off the plate or thali. It will fall to pieces. And mine does.

I’m in Sheffield’s very new Masala Dosa Café on Ecclesall Road and the adjacent table has three Indian diners. I watch them very closely when their dosas arrive. The girl breaks into the middle of hers and the men tackle theirs from the ends.

“Is that the proper way?” I ask them later. “Yes, don’t pick it up but break bits off and dip them into the chutneys,” explains one. And how are their dosas? “Good.”

Which is an accolade indeed for the dosas had not been cooked by someone from Kerala or Sri Lanka but Tony Whiteman from Essex.

You can’t miss the little 20-seater café and takeaway: it’s the one with a life-sized plastic tiger outside. Inside, the place is decorated in the Indian national colours of orange, white and green. That’s Tony and his fellow chef Liam Hamre on the hotplates and Tony’s wife Praful on the counter.

They met when Tony was working for HSBC in Hyderabad and Praful was a graduate trainee. They’ve been married since 2002 and in Sheffield for the last two and a half years. Tony’s never worked in catering before – “Liam helps me fill in the gaps” – but it’s a big change from banking. 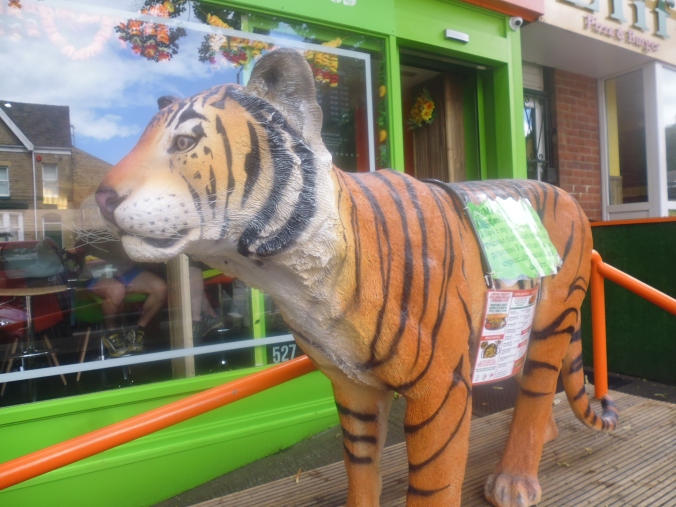 Tony learned how to make dosas at a place called the Dosa Centre in Hyderabad. His wife’s family helped organise the lessons. “I was trained on the street in Hyderabad, quite an experience,” he says. Then he trained Liam.

I say I am impressed but Tony is disarming. “Dosa being what it is, it’s not rocket science.” But it’s not that easy. The batter is a mix of fermented urad dal and rice flour, which has to be carefully spread on the hotplate to cook. Experts had produce dosas several feet wide. Tony and Liam settle for a more modest foot or 30cms.

“Large crispy golden dosas cooked live” trumpets the menu. I order a chutney masala dosa, £5.75 with a drink, and my wife goes for the Chicken 65 masala dosa, at £6.95 with a drink. Service is a little slow but we don’t mind waiting.

The dosas are served on tin thalis with the compartments filled with a sambar and various chutneys. I’ve got something coconutty, something coriander andanother which is probably tomato-based. The central third of each dosa is filled with a spicy mix of crushed potato and onion. My wife’s has red coloured spicy chicken pieces. It apparently gets its name from being invented in 1965 at the Buhari Hotel in Chennai (Madras).

We liked the contrast between crunch and soft filling, the dips and the spiciness which creeps up on your palate so by the end of the meal your mouth is all a tingle.

It’s only in the last few years that we’ve been introduced to dosas in Sheffield as South Indian and Sri Lankan restaurants have arrived.

The café has so far only been open a few weeks and around a quarter of the custom is Indian which is a good sign. We loved it and will be back as there are more flavours to try: the Mysore, the Pav Bhaji, Chinese, Pulled Pork and Jini . . . and more. So if you want a tasty snack our advice is Follow That Tiger!

Liam on the hotplate while Praful serves