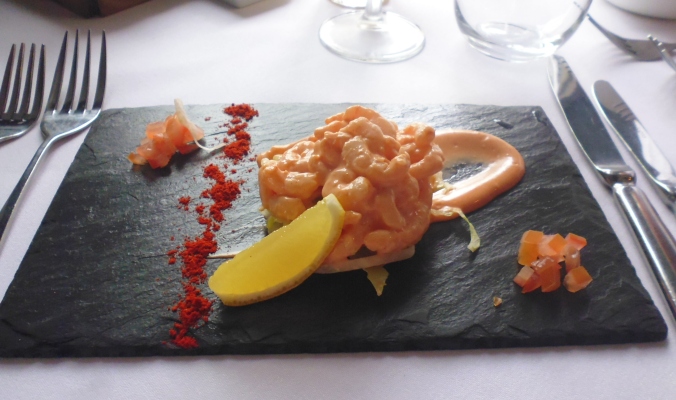 Prawn cocktail on a slate

I can remember when The Maynard finally laid down its Arms after almost a century in 2007. For all that time it had been quite content to be the Maynard Arms, Grindleford, a hotel and pub alongside the old turnpike which is now the B2651.

Then owner Paul Downing dropped the ‘Arms,’ refurbished the building as well as the name and turned it into a boutique hotel and wedding venue known simply as The Maynard (with the definite article, if you don’t mind).

Some things don’t change, I think, nibbling on a bread roll as I gaze through the dining room’s open French doors over the fields towards Grindleford village. The Maynard, arms or no, was a regular on the ‘Chews with a View’ list I regularly trotted out when restaurant reviewing for the Sheffield Star.

Turn your head and there’s another view. The back wall of the restaurant is still dominated by a painting of the vista over to Hathersage. In this case art is actually superior to real life for the artist has removed the trees blocking your line of sight.

It is decades since I first came to the old Maynard Arms for Sunday lunch and was so thrilled by the rosy hue of the tender beef that I identified myself to the manager to congratulate the kitchen. He couldn’t believe his luck and whisked me away, gave me a drink and drilled me full of PR stuff, to be on the safe side.

When the glowing review appeared the hotel phone rang hot with bookings but perhaps the staff were not so prepared. I had reports that gravy was spilled, service was slow and, from people who liked their meat grey and had not properly read the report, that the beef was undercooked. “They had to finish  it at my table,” spluttered one man, unconvinced by my saying that they had given him special treatment by cooking it on in a flambe pan. 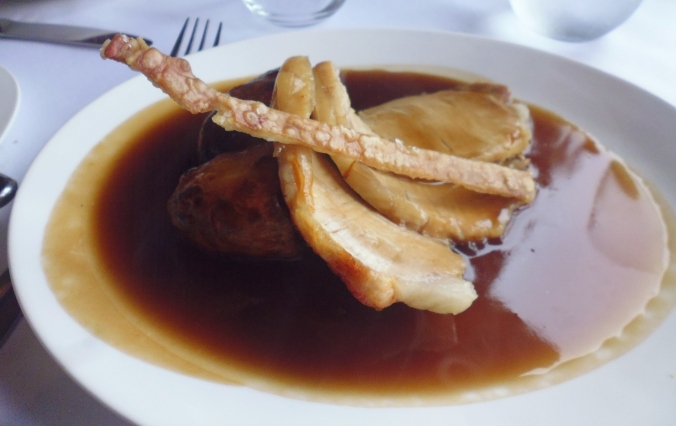 Rather a lot of gravy with my pork!

Once again we are here for Sunday lunch and I have high hopes for The Maynard has two AA rosettes. It is a family day and most people are casually dressed. My wife whispers: “Don’t look now but there’s a man eating his lunch in his flat cap.” I turn, discreetly, and, under that painting of Hathersage, so he is.

A little later he walks by to the lawn with a small child. “He’s wearing Wellington boots,” I splutter. “Are they green?” “Yes.” “That’s all right then.”

Before lunch there was no room in the lounge so we had been asked to sit in the bar for a while. The Maynard is ‘dog friendly’ and for £10 a night your hound can stay with you. There were at least four in the bar and a great deal of yapping (some under the tables while their owners ate).

Prawn cocktail here comes not in a glass (that would be too obvious) but on a slate. It lacks eye appeal. My teriyaki salmon fishcake is a bit on the small side but otherwise OK. And that’s how our lunch goes: just OK.

For some reason I do not have the beef but plump for pork. It is a little underflavoured and the roast potatoes hard and leathery, as if they’d been around the oven too long. It is swimming in gravy but not in a good way: the gravy lacks meatiness. My wife’s roast chicken is better and so is her gravy. “It’ll be the same,” she says, but it isn’t. For a start it is seasoned. And her potato cake has flavour.

Two courses cost £20, three are £25 but we can’t summon up the enthusiasm to go on so call it a day after coffee. Service is pleasant, far outshining the kitchen on our visit. It is still, though, a chew with a view. 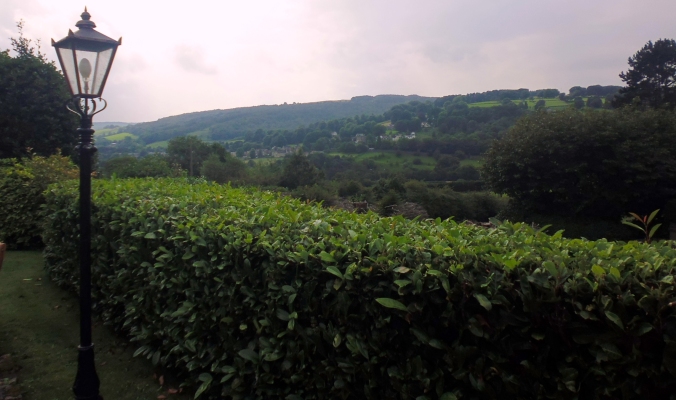 The view from The Maynard’s restaurant