I’M no good at finding sloes, that bitter fruit of the backthorn, but it doesn’t really matter because I know someone who is. Every year I get two or three pounds of berries and have to find a use for them.

Particularly as the person who provides them (my ex-wife and her boyfriend who bungied off a bridge to get them) had taken so much trouble.

That’s not difficult and this year they have come early, big ripe juicy berries which haven’t needed a frost to soften. They have been compensation for a poor blackberry season my way (although the berries on a bramble in my garden were excellent) and a dismal crop of tiny, tasteless bilberries up on the moors.

The most obvious recipe is sloe gin or vodka and I reckon it takes a pound of berries to a 70cl bottle of gin plus four to six ounces of sugar, depending on how sweet you like your liqueur. Don’t spend a fortune on gin either. The award winning Oliver Cromwell at Aldi is a best buy at just under a tenner.

Normally, after destalking and washing, this is a painstaking business pricking the hard little berries with a pin to enable the juices to leach out. I have been given another, quicker, tip: run them against a grater. But I didn’t need to do either, they crushed easily in my fist.

I put them in a large jar which I had strained only moments before of last year’s sloe gin. You do, of course, get more than 70cl of sloe gin because the volume increases with the sloe juice and dissolved sugar. It doesn’t really take a year to make the gin liqueur. I was just lazy. It should be ready for Christmas. Autumn in a bottle!

But what to do with those used sloes? They were still gin soaked and it seemed a waste to throw them out.

In previous years I have painstakingly stoned the fruit and turned them into Mother’s Ruin Chutney. I still have the odd jar and it’s terrific. I have also made truffles out of them and if you want to know how to do it see here

I warn you, it’s fiddly so I for one am not doing it this year! Instead I decided to use them in a hedgerow jelly, when there’s no need to stone anything. I used the gin soaked sloes, some fresh ones, half a pound of blackberries from the freezer where I also found some blackcurrants picked earlier this year on the Ponderosa. These last would provide the pectin to make things set. It occurred to me I could also call this Black Fruit Jelly: blackthorn, bilberry and blackcurrant.

Making jelly is easy. There must have been several pounds of fruit, tipped into a preserving pan, just covered with water and simmered until soft. Then tip them into a scalded jelly net (I have now bought a little jelly making rig so I don’t have to suspend it from an upended stool) and allow to drain overnight.

The discarded fruit went in the compost and I measured the juice, just under a litre. For every 600ml of juice you need 450 grams of sugar or pro rata. Simmer until dissolved then boil fast (about 10-15 minutes) until you get a set. I ignore my deceitful jam thermometers and use the saucer test: chill two or three in the freezer, take one out, put a blob of jelly on it, turn off the heat, put the saucer in the fridge for five minutes, then see if it wrinkles. I got a result, a nice, soft set, on the second attempt.

That made half a dozen small jars. The jelly makes a change from jam on toast, can be used to fill cakes and a spoonful really enhances sauces and gravies.

I still had some sloes left over so I bunged them in the freezer until I decide what to do with them Any ideas? 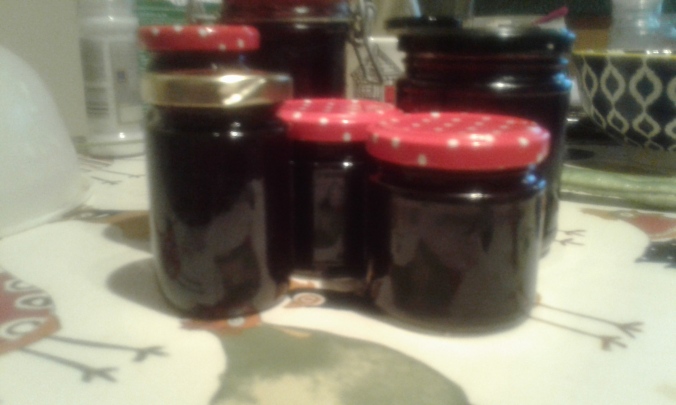