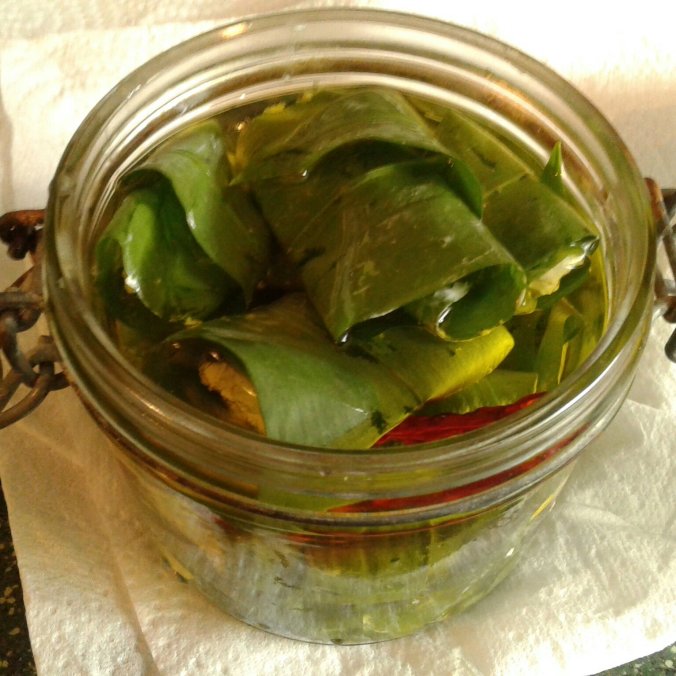 WHEN the wild garlic appears I go demob happy from winter and high-tail it down to my favourite spot to gather armfuls of it. But there is only so much pesto one couple can consume.

I have a jar in the fridge and more in the freezer and it’s been in soups, as a dressing for new potatoes, inside ravioli, spread on braised pork chops but, as it happens, not very much as a pasta sauce. A few fresh leaves have found their way into tonight’s bubble and squeak.

But I still wanted a few more ideas on what to do with ramsons or Stinking Jenny, by far the best folk name for this short-lived spring green. And I found it in my copy of Katie and Giancarlo Caldesi’s The Gentle Art of Preserving,

It’s a recipe for wild garlic wrapped labneh (a soft cheese) preserved in oil. You can use any soft cheese, or goats cheese or feta, but they made theirs with home made labneh and so did I.

It’s rewarding in itself. Just strain a 500g tub of Greek yoghurt through a double layer of muslin overnight (I used a sterilised jelly bag) and by the morning you’ve got, in my case, 270g of creamy, tangy soft cheese. This needs to be mixed with a teaspoon of sea salt for each 150g and chopped herbs of your choice. 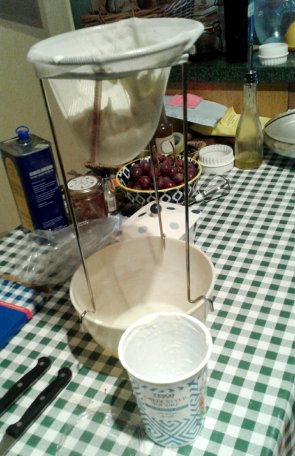 Now I gather if you leave it for a day or two the labneh firms up but I’d already picked my ramsons and needed to press on. Don’t select either too small or too big leaves, which will be coarse, but something in between. You will probably need two teaspoons to put a blob of cheese at the bottom of the leaf then roll up towards the pointed end.

I sterilised a Kilner har by boiling it and, when cooled, put a little oil in the bottom. The recipe stipulates extra virgin olive oil but as this was an experiment I used ordinary olive oil. Using tongs, I managed to get the little parcels in without mishap. Then I added a dried chilli and topped up with oil and sealed the jar. I got about nine parcels of varying sizes in.

Normally I’d roadtest* this recipe before blogging but if you fancy having a go you’ll need to collect some ramsons before the season is over. I’ll give them a week in the jar and report back.

One thought on “Yet another wild garlic recipe!”