DAWES’S Restaurant Law (and there are several) states that any place with men outside touting for business should be avoided at all costs because they can’t be any good. But every law has exceptions and this one does not apply in Funchal, Madeira.

Venture into the sidestreets off the Grand Place in Brussels and you will find a legion of men outside restaurants aggressively inviting you to eat the same miserable dish of frozen moules and packet chips at ridiculous prices.

In Greece, in the heat and the sun, it all looks so tempting but each has a geezer touting practically the same menu, whether on the mainland or islands. Beware of the moussaka, almost inevitably made and frozen in a Romanian factory.

It’s much the same menu wherever you go in Funchal: scabbard fish with banana, pork on a skewer or grilled limpets, but the food is very often fresh, always the fish, and almost always very decent for the price, even right in the middle of the touristy Old Town, two parallel streets with restaurants hugger-mugger with each other.

And outside every one, even the posh Restaurant du Forte, is a man (or sometimes a woman) inviting you in. Very often they hunt in packs. But it’s the way they do it which is so engaging : broad smiles, a little wit and just a smattering of banter. 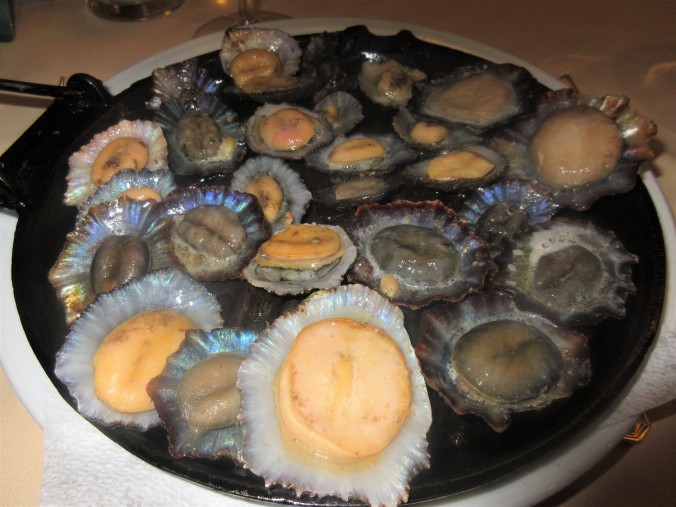 “Hello, you’re back,” says one, arms outstretched in welcome, although he’s never clapped eyes on us before. “Hungry? Come on in,” urges another. If they recognise you, or even if they don’t, they will wave their menu frantically and run across the road.

Pass by enough times and you recognise their patter and spiel. “Mind the pavement,” warns one, pointing to a dip, as if you’ll be so grateful you’ll take a table.

They even do it in the scruffy bars overlooking the often whiffy sewage treatment works Funchal has seen fit to build on its promenade.

I ask Miguel, touting outside O Violino, where a support for the town’s cable car comes down through the ceiling into the restaurant, how good his strike rate was. One in 20 he reckons.

The town is full of English, German and some Dutch and French tourists yet inevitably they greet you in the right language. I ask how they can tell. The English have more open faces, the Germans harder, says his female colleague.

At least these touts do not stick stick to you like limpets. You’ll find those inside, on most menus as a starter. I could not get enough of this local speciality, griddled and doused with garlicky oil or butter and perhaps sprinkled with parsley. They have the texture of whelks and taste like winkles .

You can’t miss eating the local bread, bolo do caco, a sort of breadcake made of flour and mashed sweet potato (although it doesn’t taste sweet), baked on a griddle, sliced thtough and slathered with garlic butter.

Scabbard fish, a long, thin, black creature you can see at the local fish market, is quite bland but has a firm texture. It is inevitably partnered with banana, either fried plain, glazed or even flambeed. Banana trees are everywhere but they are not as sweet as the ones we see in the shops, more on the way to a plantain.

While most restaurants have more or less the same menu., you can go upmarket. Try Riso, just above the Porto Bay hotel, which specialises (but not exclusively) in rice dishes. Its setting is stunning, set into a cliff, with every table having a sea view. Here I had a superb fish soup with some of the best prawns I have tasted. Soups are another Madeiran speciality.

And, guess what? Riso doesn’t have a tout out front.