ALMOST alone among Sheffield’s Italian restaurants you can’t get a pizza at the latest to open, Grazie on Leopold Street. Not even a pizza Margherita.

But there is a Margherita. She makes the pasta.

Traditionally back home the best pasta is made by ageing Nonnas with bulging biceps who have been kneading and folding and rolling all their lives. The Margherita who makes the three types of pasta here is all of 21 and, not having seen her, I can’t speak for her biceps. But she has brought her mum with her! It’s glorious.

This is the lightest, springiest, toothsome pasta I’ve eaten for some time. I’m having main course orecchiette, ear-shaped pasta made with fine semolina (as is the shell-shaped cavatelli) in my Amore Pugliese (£9.25). It’s tossed with the stems of cimi di rapa, wild broccoli, anchovies, chilli, garlic and breadcrumbs for extra texture.

You could almost imagine being, if you ignore the double-deckers rolling by the restaurant’s picture windows, hundreds of miles away in a ristorante fanned by Mediterranean breezes.

Grazie, with a mostly Puglian regional menu, is owned and run by Vito Vernia, from that province via Piccolino in ,where he was general manager. Margherita is also from Puglia so she knows exactly the sort of pasta needed.

Grazie has already been widely praised, not least by my pal Craig Harris, whose review you can read here . I’d just like to add a few comments.

I don’t just like to leave a restaurant with, hopefully, a happy tummy full of good food, but an idea or two I can try at home when I’m feeling particularly cheffy. And, my word, there were quite a few at Grazie.

Craig and his wife Marie have already made one visit and he’s back, this time with us. And I’m eyeing up his main course sausage and mash. But it’s not as we know it. 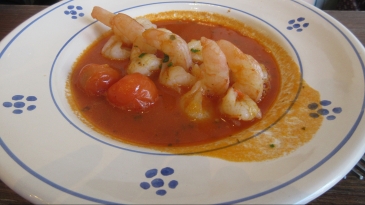 There are two butterflied Italian sausages, as juicy and spicy as you could want, which have been griddled so there are perfect parallel lines. Instead of mash there’s a pool of broad bean puree and a garnish of caramelised red onions.

Fave e salsicca (sounds better already, doesn’t it?) is very tasty and I think I’ll give it a go, although I want to replace the broad beans with mashed potatoes. And I can’t help thinking that £14 is a bit steep for a couple of bangers, no matter how good.

There are lots of interesting things here. The semolina-rich Altamuran bread is excellent, particularly as a bruschetta tipica (£6.50). It’s smeared with some of that broad bean puree and topped with more cimi di rapa, the leaves this time, crispy onions, chilli and extra virgin olive oil. I love the Italian way of using two different parts of the broccoli. You won’t find it over here but try tenderstem or purple sprouting.

Graizie is in the premises of what used to be the Prosecco Lounge and reminds me a little of the early days of Gusto, then round the corner in Church Street, with its burst of new (to Sheffield) ideas and lively cooking.

Vito is married to Elena and you might see her and their new young baby Joseph popping into the restaurant during the day.

Grazie does coffee and cakes until 12 then the full menu operates through the afternoon and evening. There’s plenty more on the menu for us to explore – and we will.