Cary (left) and Ian at their new venture

Dan Walker was walking his dog when he met Tony Foulds 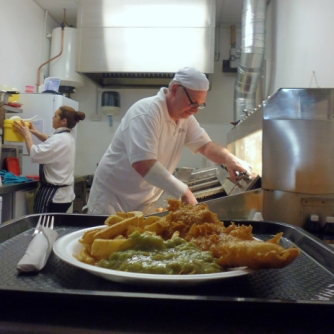 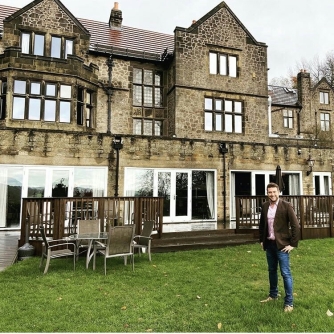 Rob Hattersley on the lawn at The Maynard

AS I write the blog, now in its fifth year, has had almost 80,000 views in 2019, well more than double the previous year. The total (check the front page for the latest figure) is over 183,000 since Another Helping first appeared in 2015.

It’s gratifying that so many people like this mix of restaurant reviews, recipes, food history and current news, particularly when the abject failure of the local newspapers to cover the scene properly leaves so many people wanting more.

Is it poor reporting, laziness or being too timid to pick up the phone that leaves them simply rewriting what appears on hotel and restaurant websites?

So when Hassop Hall Hotel suddenly closed, to be bought as a private house, only this blog told the full story of who had bought it. You can join the 11,000 readers who read it here

It was the same story with the closure of another hotel, The Maynard closed at Grindleford. Local papers hardly touched it but you can read about it here and here, at Peter and Rob save the day for Maynard

There were plenty of other scoops, such as the latest exploits of chef Cary Brown, revamping the Hathersage Social Club with businessman Ian Earnshaw.

There was much else. Other top reads (as in previous years) were Derbyshire oatcakes and Sheffield  Fishcake

The biggest volume of traffic, though, had nothing to do with food but everything to do with abject reporting. The big story of the year was how a local pensioner, Tony Foulds, had spent a lifetime tending a memorial to crashed WW2 American airmen in Endcliffe Park.

But did he? And why did nobody see him? And why did his eye witness account contradict the official record of the time? But all it takes is a credulous BBC presenter and local papers such as the Sheffield Star and Yorkshire Post to keep silent on what they knew to be a fantasy to become fake news.

Thanks to this blog, some 22,000 readers know the real story.

So what will 2020 bring? Who knows? But Another Helping will bring it to you first. 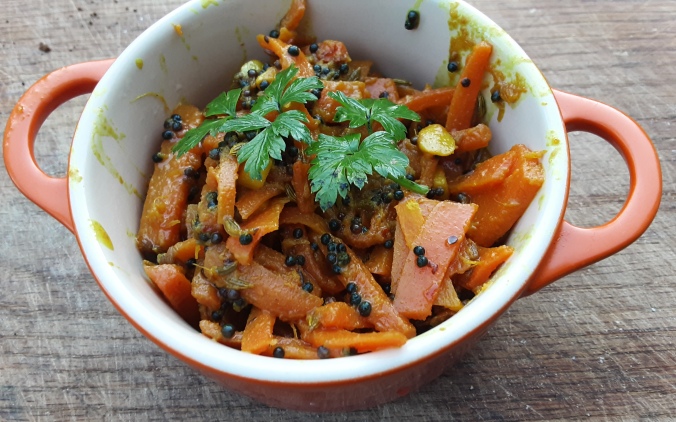 WE WERE having dal and rice for tea and I wanted something spicy and crunchy to brighten things up. My Anglo-Mango chutney wasn’t quite the thing.

Instead of going out and buying a jar I rustled up my own version of gajar ka achar, or carrot pickle.

Sub-continental enthusiasts might bridle at my take on this lovely little side dish but it works for me.

For one sitting you’ll need two medium-sized carrots cut into batons and the principal spices are mustard seeds, turmeric and fresh ginger. Anything else is up to you – a bit of chilli if you want it hot, a pinch or two of cumin and a little fenugreek perhaps.

Heat a little oil (mustard oil is more authentic but not essential here) then add the spices. I used two dessert spoons of black mustard seeds, two inches of grated fresh ginger and a dessert spoon of turmeric.

I like to add a bay leaf when cooking and I scattered in a pinch of chilli flakes. Season to taste.

Now add the carrots batons and fry gently for about five minutes before adding a dessert spoon of sugar and enough white wine or cider vinegar to cover. Keep cooking until the vinegar evaporates. Add more if necessary.

You are looking for a sweet-sour, spicy finish with the carrots retaining a little crunch.

We find this very one-dish and it’s ready within minutes the next day. It will improve if left for a day or two.

Incidentally, if you have any leftover rice and dal then mix them together with a little beaten egg, shape into small patties, dust with flour and shallow fry for a snack, lunch or light tea. They are very good.